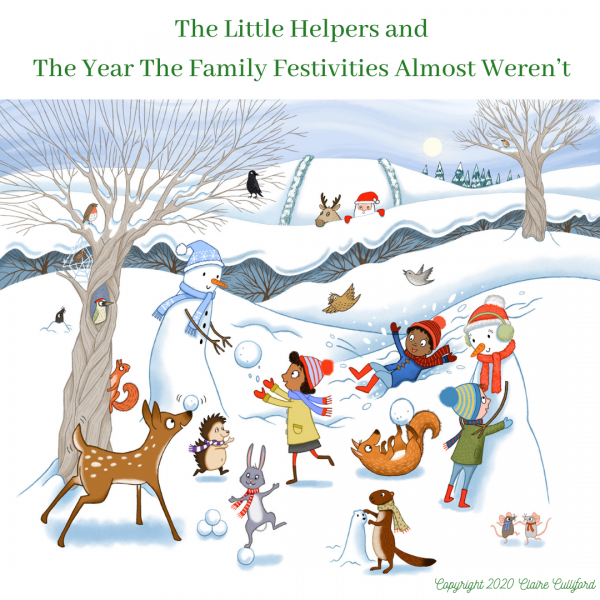 Santa, who had been dozing off in the rocking chair beside the warm, crackling fire, opened his eyes again in an instant. He looked over the top of his wire-rimmed glasses at the laptop on the kitchen table. Another Skype call! He’d had so many this year. He heaved himself up out of his cosy armchair and made his way over to his computer. Sitting down on a beautifully carved wooden chair, he moved his mouse to click on the big green button and accept the call.

The screen filled with the face of a familiar friend. It was Penny the Penguin, all the way from the South Pole!

Penny was smiling but her little wings seemed to be flapping around more than usual at her sides.

“Hi Santa!” replied Penny, a little out of breath. “I’m OK thanks. I’m just calling to see whether it’s true?”

Santa looked quizzically at the screen. What could Penny possibly mean?

“Whether what is true?” he asked, hoping to find out what little Penny was talking about.

“That the family festivities aren’t happening this year!” Penny peeped.

Santa was shocked. Where had she gotten this idea from? He knew nothing about this at all.

“Where did you hear that?” Santa enquired.

“It’s been on the news, on the TV and social media. It’s everywhere!”

Santa scratched his head. How odd. He’d watched the North Pole News every day that week but he’d not seen anything on there. Mostly it was just reports about reindeers’ noses getting a lot redder this year!

“How strange. This is all news to me, Penny,” Santa explained. “But as far as I know, I’m still going to be visiting all of the little boys and girls around the world who’ve been good this year.”

Penny sighed a cute penguin-y sigh of relief. “Oh thank goodness!” she exclaimed. “Then I’ll see you when you’re passing through Antarctica,” she said, with a wave. “Bye Santa!”

Santa sat looking at the screen for a few seconds more. Perhaps I should just check with a couple of other friends that I haven’t missed something, he thought to himself. So, he moved his mouse around again, went straight to his Contacts folder and looked up Elsie Elf. Before barely a boop-bee-doo could be heard, Elsie’s face, with its rosy little cheeks, filled the screen.

“Ho-ho-ho Elsie! I wonder if you can help me with something?” Santa asked.

“Of course!” replied Elsie, cocking her head to one side. “What is it?”

“Penny Penguin just called to say she’d heard the family festivities weren’t happening this year,” Santa explained. “Have you heard anything about this?”

“Because of what’s been happening this year, we elves haven’t been able to go to work. No-one was sure that families would be able to get together for the winter celebrations. But it seems it’s going to be possible for a day now.”

“Only delivering presents is going to be hard because they’d have to be kept squeaky clean and there’s not much money around to pay for you making them. Plus people are really concerned about children having too many things. It’s not good for the environment as it causes a lot of waste.”

Santa went quiet for a moment.

“Oh yes,” Santa finally said, shaking himself out of his stupor. “I was just thinking. In that case, we’ll need to adapt our usual service. Children still need winter joy in their lives, especially this year. Let me get back to you, because I think I’ve got an idea.”

Santa heaved himself up from the wooden chair and headed into his workshop. He looked around the big room and realised how empty it was looking. Elsie was right. The elves hadn’t been able to work. And no-one had been sending him lists to prepare presents like they usually did. And he wasn’t sure he could clean them all the way he would need to.

Things will just have to be a bit different this year Santa thought to himself. But I’m going to need a lot of help to bring children everywhere the winter joy I’m thinking of.

As he turned to leave the workshop, Santa took down his huge, warm, fluffy jacket, hat and gloves from a shelf beside the door. He put them on as he walked back through the kitchen, buckling his coat belt around his rather sizeable tummy. He stepped into his winter boots, which were beside the back door. And then he pulled open the heavy door, walking out into the freezing, frosty evening.

The North Pole, where Santa lives, is full of ice and snow all year around. Well, it is at the minute anyway. Santa had noticed that there’d been a bit less ice and snow appearing in recent years. But there was still enough for Sidney the Snowman, who lived in Santa’s garden.

“Ho-ho-ho Sidney!” Santa shouted out, as he approached the smiling snowman.

“Sidney, there’s been a change of plan this year. I’m going to need some help to make sure festive celebrations still happen for children around the world. Let me tell you what I’m thinking.”

As Santa whispered his idea into Sidney’s ear, Sidney grinned. Santa then turned and walked towards to the back door again. Just as he was closing it behind him, he could hear a loud whistle in the garden. The first step in the plan was underway.

Santa settled back down at his laptop on the kitchen table and within a few minutes, had finished another Skype call with Penny in the South Pole. He was going to need her and the other Little Helpers’ assistance too. Penny had been delighted at his idea and only too happy to help. She reassured Santa that the other Little Helpers would feel the same and want to help in organising things too.

Over the next few weeks, Santa spoke regularly to Sidney the Snowman and Penny the Penguin and they assured him that all was being prepared ready for the family festivities. Santa felt a warm feeling of contentment inside.

And so, on a winter’s night towards the end of the year, as children all over the globe gradually began to go to bed, in one country after another, Santa’s helpers put his plan into action.

Swirling snowflakes began to fall from the sky everywhere. They landed softly on the ground and over time, settled into a thick white carpet. Out of the snow, shapes magically started to form. Snowmen and women appeared in every village, town and city. Stars glistened in the sky above like lights shining down on all that was happening. Then, animals of all shapes and sizes started to appear. From tiny hedgehogs to reindeer to birds, they made their way to fields, gardens and parks.

As dawn broke across the different continents, children woke up early, excited because it was time for the family festivities. As they drew back curtains and opened blinds, their little faces lit up at the sight before them. The whole world had become a winter wonderland. Rushing out to check they weren’t imagining things, they whooped as they realised the snow and snowmen and women were all real. They bent down to make snowballs and slid down snowy slopes, giggling as they landed in piles of soft snow. All around them, wonderful wildlife watched on. When the children went to investigate, their eyes opened wide with awe, as the animals rolled, skipped and swooped all around them. The children’s little faces filled with joy.

Santa, back at home, opened up his laptop and started a Skype group chat. Before long, his screen was filled with Little Helpers from all around the world, and Elsie.

“Did it work?” Penny asked, flapping her wings excitedly.

“It ho-ho-ho did,” Santa replied, giving a thumbs up sign. The animals and Elsie all cheered and whooped.

“Thank you everyone!” Santa waved. “You’ve helped make sure that children all over the planet can still have their celebrations. Family festivities are really about love and having fun. And Mother Nature always provides us with everything we need to have both of those!”

After Santa had waved goodbye to the last Little Helper, Kati the kangaroo, all the way over the other side of the world, he ambled slowly towards his rocking chair. He settled himself down into it. The warmth from the fire made his cheeks turn pink. As he thought about how much could be achieved when everyone helped each other and worked together, his eyes slowly closed. His last thought before he fell asleep was that perhaps family festivities would be even more special from this year on; now children everywhere had learned that being present, and not presents, were what mattered most.

Wishing you a safe, peaceful, happy and healthy festive season. 💚