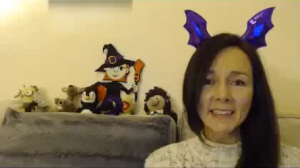 When for fun we like to feel fright and fear

But did you ever think that for Halloween

It might also be cool for us to be green?

“And the amount of smoke!” cried Paula, flapping her wings vigorously. “I’ve never seen anything like it. Imagine if they’re all like that!”

“I’m guessing they are,” Tyler says. He’s no expert, but he knows that the members of most species act in a similar way.

The other Little Helpers listen as Paula continues to tell them about Wanda the Witch who lives in her forest.

“Between cauldron and broom fumes, it’s just not good for the air!” she explains. “I know it’s a special event. But we have to do something to help her look after the environment better or it could be like this every year.”

Hector, Penny, Kati and Bella all nod in agreement, and then go quiet. They all know what they need to do. They’re just not sure how to do it! So they take a few minutes and let their creative little minds get to work.

“I have an idea!” cries out Bella, suddenly. “The people in the house belonging to my garden used to have one! Let’s find the witch. I think I have a solution.”

Paula squawks excitedly and gestures to her animal friends to follow her through the forest.

In less time than it takes a hedgehog to roll down a little hill and a bee to pollinate a flower, the Little Helpers arrive at what looks like the opening to a cave. It’s partially hidden behind a particularly dense clump of trees.

“This is where she lives,” says Paula, before she leans into the entrance of the cave and squawks loudly, “Hello! Is anyone home? Can we come in?”

The Little Helpers all lean forward to listen. And then…

“Hi!” croaks a voice right behind them.

The little animals jump as high as it’s possible for them to (which isn’t that high), except for Kati the Kangaroo, who of course leaps a long way into the air.

The animals spin around to find the very person they are looking for: Wanda the witch.

“Hi Wanda!” says Paula, who is the first to recover her composure. “How are preparations going?” she enquires.

The Little Helpers look at each other, very confused.

“Actually, that’s what we came to see you about,” says Paula. “We were wondering whether or not you’d thought about doing things in a slightly more environmentally-friendly way?”

Wanda looks at her, a little bemused. “I do the same thing every year,” she says.

“I know,” responds Paula. “And that’s why I’m asking. In case you hadn’t realised that some of the things you’re doing might be great for Halloween, but perhaps aren’t so great for the trees and animals in the forest.”

“Well I have say, I’ve never really thought about it,” admits Wanda, looking a little embarrassed.

“Don’t worry,” says Kati, who can’t help herself and starts to bounce up and down on the spot with enthusiasm. “That’s why we’re here!”

“Would you mind if we made some suggestions,” asks Bella, buzzing over to beside Wanda’s right ear. “There’s one thing I can think of straight away!”

“Well if it’s quick, and cheap, then maybe there’s still time for me to do it before tonight,” says Wanda.

So Bella begins to explain about the electric brooms that she’s seen. They don’t run on petrol, like Wanda’s current broom. So they don’t pump any pollution out into the air.

“I had no idea there were other kinds of broom to travel on,” she confesses.

“We suspected as much,” says Paula. “We’re really lucky because we get to learn about new solutions for helping the environment all the time. It’s good to share.”

“And do you have any other ideas?” Wanda wants to know.

Tyler steps forward and quietly says, “I’m not sure what you put in your cauldron with the water, but it seems to be polluting the air too.”

Wanda’s nose scrunches up as she tries hard to think of what it is that she uses when she’s making her spells.

“Of course!” she suddenly realises. “It’s my magi-powder.”

“Would it happen to have any chemicals in?” asks Tyler.

Wanda reaches her hand into the pocket of her huge black cape and pulls out a box. She lifts it up and looks at the back of it. “Oh yes,” she says. “It’s got lots!”

“Perhaps you could think about mixing some fruit or leaves or flowers or herbs with the water instead?” suggests Tyler.

“If you could help me collect them,” replies Wanda.

So, The Little Helpers head off into the forest with Wanda. Firstly they go to pick up an electric broom from the house attached to Bella’s garden. Then, they look for fruit, leaves, flowers and herbs on the forest floor. Hector helps pick them up so Wanda can use them in the water of her cauldron to conjure up spells.

When they arrive back at the entrance to Wanda’s cave, they leave her to continue her preparations.

A few hours later, as darkness falls, The Little Helpers hear a cackle and a pop and a beautiful aroma begins to waft out of the cave and past their noses. Unlike before, there’s no smoke, jus a wonderfully sweet smell that reminds them all of something. As they try to work out what it is, Wanda walks back out of her cave, her black hat perched pointedly on her head and her huge black cloak covering her body from head to toe.

“I thought you might like these,” she says, and reaching into the pockets of her cloak, she hands each of them a spiced toffee apple.

The Little Helpers squeak, squawk, buzz and bounce in delight, licking their lips.

“Thank you for all of your ideas. I have to go and join my friends for the celebrations now,” says Wanda, settling herself safely on to her broom.

She stands over her new means of transport and presses the button on the handle, just as Bella has taught her. Faster than she can say “I’m going green for Halloween!” the broom speeds along the ground and lifts her up and away into the sky. Only this time, there’s no broom fume trail gushing out behind her.

The Little Helpers watch Wanda disappear off into the sky, smiles across their faces. They’re happy they’ve been able to help her be a bit kinder to her natural environment.

Just as they’re about to turn around and make their way back through the forest, Paula suddenly remembers something.

“Wanda!” she squawks at the top of her voice, to the figure gradually fading away in the distance. “Remember to tell your friends it’s cool to be green for Halloween!