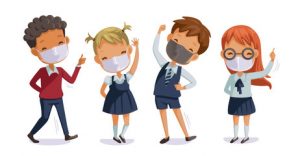 “Mummyyyyyyy?” the little girl said, in her soft, gentle voice.

The word was pronounced with the last syllable drawn out for as long as possible. It was as if she was giving herself thinking time. The slight rise in intonation at the end left no room for doubt. This was the tone used exclusively when something was praying on her mind and her curiosity got the better of her. A question, quite possibly a challenging one, was coming.

She didn’t ever want to inhibit her daughter’s inquisitiveness. It was one of her most endearing qualities. Everything, absolutely everything, fascinated her. Which is exactly as it should be for a bright 5-year old only just starting out on her journey to learning about the world around her.

“Why do we wear masks?” the little girl asked.

She pointed at the TV. It was still on in the corner of the room, muted but with a screen showing shoppers lined up in a queue outside a supermarket. Elena  had turned the sound down when her last work call came through. As she considered the very new, but already less abnormal-feeling sight, the scene changed. Medics in a hospital. All of them wearing masks. As one of them came to the fore to speak to the interviewer, he pulled his mask down under his chin. He bore a very noticeable scar on his left cheek, visible only now his face was uncovered. Masks were used for so many purposes in life, Elena  thought. How should she explain to her daughter why lots of people had now begun to wear surgical-looking ones to go about their daily lives? And should she introduce the notion of other physical masks? What about metaphorical masks? Was five too young to be learning about those? The permutations and combinations that a 5-year-old’s parent has to consider in the second or two they are permitted to deliberate before a question needs to be answered can be mind-boggling. But, as she’d learned, 5 year-olds can cope with pretty much anything in the adult world, as long as it’s delivered to them in the right form. So she might as well deal with the subject comprehensively. Otherwise, her incomplete response would only be sure to breed more questions.

“That’s a good question, sweetheart!” she began. Praise. Positive reinforcement. Always a good place to start. Her educational training had taught her that. She slowly pressed ‘Send’ on the email she had just finished writing. And then closed her laptop lid down. When her daughter needed to understand something, she got her undivided attention. She would remember that even more than the answers she provided in the years to come.

“Well, why do you think we might wear masks?” continued. Children learn best when they work things out for themselves. They use a combination of the information they already have to hand and their creativity. It’s a wonderful gift. And one that many adults have lost, Elena  thought sadly.

Her daughter looked up from where she was sat, on the other side of the kitchen table, colouring in a picture. The yellow felt tip dangled precariously from her little fingertips, as her focus deviated from her previous task. Her little brow and eyes scrunched right up when she was contemplating something with extreme effort. You could almost hear her little left and right frontal lobes whirring into action then vying for priority. There was an awful lot of invisible activity going on behind that cute little forehead. Elena never failed to marvel at the workings of the brain. To see it occurring in a little human being from the time they leave the womb was, she believed, one of life’s privileges and greatest wonders.

“Perhaps it’s to put something between our faces and the world?” her daughter finally asked, with a hint of both confident hope and hesitation.

Give a 5 year-old a problem and they would articulate a solution in the most simplistic and succinct way imaginable. Elena never failed to be amazed. Politicians with decades of education and experience behind them weren’t even able to perform that magnificent feat.

“I couldn’t have put it better myself, darling!” Elena congratulated her. “You are so clever!  And why do you think we need to put something between our faces and the world?” she asked. The process had started. She would simply prompt and facilitate its continuation.

Her daughter looked as if she about to blurt something out, and then stopped. That was rather unusual. She went quiet for a few seconds before quietly responding, “So the world can’t hurt our faces?”

Progress was being made.

“Definitely,” Elena  congratulated her. “And how do you think the world can hurt our faces?”

This time, there wasn’t much pause for thought.

“Car fumes can make us cough!”

Clearly climate change education in the Reception Class wasn’t lacking in any way.

“They certainly can! And what happens if you get a cough?”

“My throat gets sore and my chest hurts.”

Her daughter’s mouth turned down at the corners a little as she recalled the last time she’d had a cough, just a few weeks ago. It had been an unpleasant, dry, hacking one that had kept them all awake a number of nights in a row. The sound of it had prevented any of them getting any slumber.

“So why do you think we wear masks?”

Her daughter looked delighted as it became clear she’d reached her own conclusion, and in record time. Her little face burst with pride. Elena could barely believe how smoothly this conversation had gone either. Most that began with a question could easily last a day, if not more. She placed her elbows either side of her laptop on the table and rested her chin on her hands. She wanted to be full focused on her daughter when she finally made her grand revelation.

“We wear masks so I can get some sleep, Mummy!”