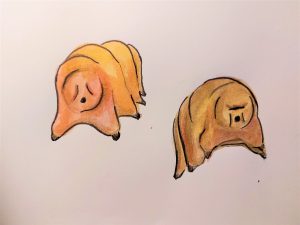 The quirky tardigrade, if you just look at her face,

Might have you thinking she’s an alien from outer space.

When really she’s the smallest animal in our world,

Around 0.5 millimetres when completely unfurled.

In an elite group of animals, called extremophiles,

There’s absolutely nothing from which they need to hide,

Thirteen hundred species can be found across the planet,

They need some water around, so we call them aquatic,

Which is why they’ve got the nickname of ‘moss piglet’.

Covered in tough cuticle, these critters are never squishy,

Enough food and water and they live two and a half years,

They can stop their metabolism, become immortal, no fear!

Bizarre mating habits? Well, of course they’ve got those too,

Were around four hundred million years before dinosaurs,

On the outside of a rocket, orbiting Earth for ten days,

If only every creature had their biology and wit,

Then just like them we’d all survive the Apocalypse!